Using a technique called Differential Interferometric SAR (DInSAR), scientists can measure deformations of the Earth’s surface from space. The centimetre accuracies that can be achieved have made this technique useful for characterizing many processes and movements, such as those related to volcanic activities, the movement of glaciers, or subsidence caused by permafrost-thaw (see Fig. 1). This measurement works by combining two radar acquisitions from different times. During this time gap, the moisture content of the soil can change and such changes could possibly impact the DInSAR signals and thus the deformation estimates. Figure 1: TerraSAR-X DInSAR signal observed over the Lena River Delta (72°N, 126°E), which is underlain by permafrost, in late August 2014 with a time gap of 11 days. The water bodies such as the river branches are shown in black. The brightness of the image indicates the coherence, a measure of the quality with which deformations can be retrieved. The phase, from which the displacements are computed, is indicated by different colours. Spatial variatiations of this phase might not only be caused by deformations, but for instance also changes of the soil moisture content.

The nature of these effects, including their origin but also their sign, size, and prevalence, are not well known. There have been only a handful of dedicated observational or experimental studies, which have led to partially conflicting results. Observational studies over vegetated areas have often led to non-significant findings, which has been attributed to the paucity of soil moisture observations and the impact of the vegetation cover. In order to quantify and assess these effects, scientists from ETH Zurich, DLR and the Jet Propulsion Laboratory studies two data sets acquired over agricultural areas in Germany and Canada, where many soil moisture measurements were available.  The radar data were acquired with low frequencies (L-band), where the impact of vegetation is expected to be minimal. In the German campaign, the growing agricultural vegetation was monitored intensively, whereas the second data set was acquired over bare soil.

By comparing the in-situ soil moisture data with the DInSAR data, it was found that the soil moisture effects were significant, i.e. they were much larger than the noise of the observations (e.g. over the wheat field in Fig. 2). They were also large enough to be relevant for many deformation studies, as spurious displacements of up to 3 cm were induced by a precipitation event. These spurious displacements were of the same sign and similar magnitude in both campaigns and the vast majority of agricultural fields, indicating a possible common origin. In order to explain and eventually model these effects, the scientists compared the observations with different previously suggested mechanisms that give rise to such soil moisture effects. It was found that only scattering from heterogeneities within the soil could explain the measurements of these two campaigns. By contrasts, previous laboratory experiments over homogeneous sand (no stones, macropores, etc.) had indicated scattering from the surface to be the cause. These surface effects are much smaller in magnitude than those from subsurface scattering in a heterogeneous soil. The scientists thus conceived a model that could combine scattering from both the surface and subsurface (see Fig. 3), which could explain the observations over soils of varying heterogeneity. 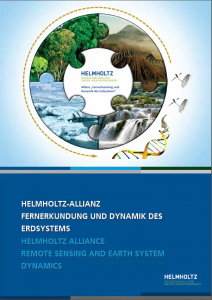